Sawarn Lata loves Nazir but her brother Allauddin is against their relationship. He marry her with a wealthy man M. Ismael. The Hindu wedding ritual of seven steps around the fire (Pheray) are taken by Sawarn Lata's best friend Zeenat, who is hidden in a traditional wedding dress.

Sawarn Lata moves to her new home but plays as a sick women to avoid any sexual relation with her husband. M. Ismael getting tired from her sickness and finally find out the real fact of her behavior. He decides to re-arrange the wedding ceremony, but not with him this time, but with his wife's lover - and that was a happy end of Pakistan's first super hit musical film.

Film Pheray was first ever super hit musical film in Pakistan. It celebrated solo silver jubilee (25 weeks) on its main cinema, and competes with famous musical Indian Punjabi film Lachhi, which was shown on Qaisar cinema. Dillagi, Kaneez, Dard and Pukar were other big Indian films at Lahores cinemas in this period.
Lahore circuit 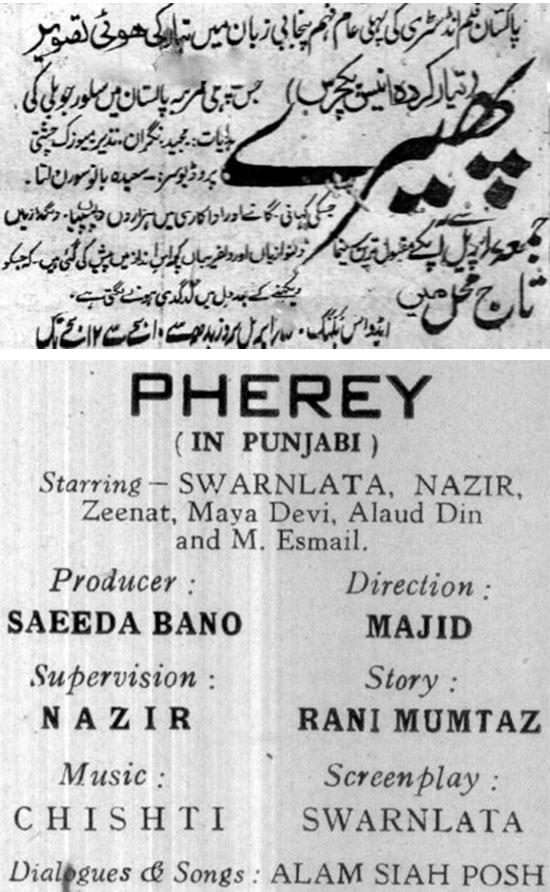 ظہیرریحان
PAK Magazine is an individual effort to compile and preserve the Pakistan's political, film and media history.
All external links on this site are only for the informational and educational purposes, and therefor, I am not responsible for the content of any external site.