She was The First Lady of Pakistan Silver Screen.. 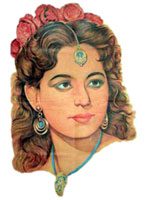 She also sang some songs as: