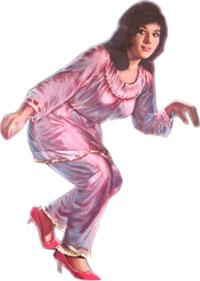 Her Punjabi film Jeedar (1965) was first platinum jubilee film in Pakistan as well.

It was a very interesting fact, that Zarqa (1969) was her last film when she left film industry. After the death of her husband writer and director Riaz Shahid in 1972, her comeback was with another diamond jubilee super hit film Khatarnak in 1974.

Neelo was born into a Catholic family with name Cynthia Alexander Fernandes. She adopted the name Abida Riaz after embracing Islam at the time of her marriage to film screenwriter and film director Riaz Shahid. She died on January 30, 2021 in Lahore.