The First Film Director in Pakistan

Dawood Chand was a veteran film director and made many films before partition. Sassi Punnu (1938) was his first film and Papiha Ray (1947) was the last released film before partition of India and the formation of Pakistan on August 14, 1947. 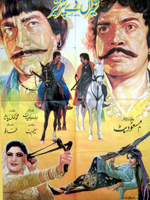 سیما
PAK Magazine is an individual effort to compile and preserve the Pakistan's political, film and media history.
All external links on this site are only for the informational and educational purposes, and therefor, I am not responsible for the content of any external site.