Ejaz will be remembered for his classic role as Ranjha in film Heer Ranjha. He was also the first ever diamond jubilee hero in Pakistani films. Despite the criticism of shortcoming in acting and bad accent in Urdu language, he was the most successful film hero on box office in the late 1960s.

Ejaz started his film career from director Munshi Dil's film Hameeda in 1956, and his last film was Jhoomar Chor in 1986, which was directed by his father-in-law Sharif Nayyar. 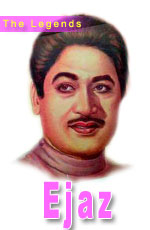 An ideal hero for folk stories

Ejaz was an ideal hero in romantic films based on folk stories. He had the highest number of title roles in these kind films. Here are some more details:

There are some very interesting similarities between Ejaz and Habib..