Husna never became a top class heroine and mainly played side-heroine or vamps role in Urdu and Punjabi films during her long film career. Husana was introduced as child star in film "jan-e-Bahar" in 1958 and played a role as daughter of Sudhir and Musarrat Nazir. 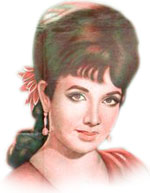 Then she became "full-heroine" and "Ajab Khan" was a hit film as solo heroine and Sudhir was her hero!

(This article is yet to be edited for the new site..)