She was a super star film heroine in Urdu films

Some facts about Deeba

(Yet to be edited)

The Lady with the Mona Lisa smile - She was the third most popular Urdu film heroine after Shamim Ara and Zeba from the mid 60s to the first half of the 70s (then Shabnam and Babra Sharif took over). She still works as character- and supporting -actress. Actually, Deeba was introduced as a child actress in film Faisala (1959) but Chiragh Jalta Raha was her first film as heroine. In her first film Faisala, her name was Chutanki as she was a little girl and worked as child artist. Deeba (real name Raheela) belonged to a poor family and lived with her married sister in a slum area at that time near Cantt station Karachi in late 50's. Her mother it is said that was lost in East Pakistan (Bangladesh) or kept away from Deeba on some reasons. Deeba was very anxious to see her mother but could not do any thing as she was under control of her sister's husband. 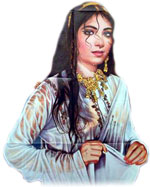 After the accident in which Rehman lost his leg, he decided to produce Millan(1964), but he was penny less and no actress was agree to work in the film. At that time Deeba was the only heroine who agreed to work in that film and took only One ruppee as signing amount for that film and worked free without any fee. Rehman's program was to shoot this film in East Pakistan (Bangladesh), and Deeba who was in search for her mother, got a golden chance to visit there and look for mother.When the unit of this film reached there, Deeba started searching of her mother, and it is said that she found her there after a long struggle.At the starting of Deeba's film career in early 60s there was a man named Mursaleen, who always had claimed that Deeba was his wife and this case was in the court for many many years. Deeba always denied to this relationship.In the 80's Deeba resided in Dammam, Saudi Arabia for many years where her husband (not Mursaleen) was employed in Saudi Television.