Pakistan Film Magazine is providing some golden memories from the past in this monthly series. You can read figures and facts, debutantes, obituaries, watch & listen to the ever green Urdu and Punjabi film songs and see some memorable film posters from this month. 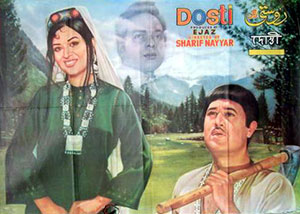 The poster of film Dosti, which was second diamond jubilee film in Pakistan. This film was shoot in London. Ejaz Durrani was producer and hero of this musical film. Shabnam played main role and Rahman was co-hero. This film was released in 1971.

Some memorable film poster's from movies released in January month..

Laray was first Punjabi film, which was released in February month (18.2.1950). It was a great musical show by legendry music director Baba Chishti.

February month has been very lucky for the film business and many big films were released in this month. Yakkay Wali was one of them on 22.2.1957.

The first Eid-ul-Fittar was celebrated in this month was on February 26, 1964. These six movies were released on this occasion:

Some famous discoveries in February month..